The Exasperating Subject of Perspective

Hi,
I decided to do a little tutorial about perspective.

Now then, a little basic theroy for starters, the foundation when working with perspective - so to speak:

Right, let´s have a look at the possibilities of perspective, an what they are good for.


After we have placed our horizon, it is time to choose which method we want to use. Though not all methods are necessarily adequate for every motive.
The vanishing points (2 Point Perspective) are always on the same level. For objects on the ground. There is however an exception, the 3 point perspective has one point far off from the horizon. The farther you place this third point, you can enhance the effect of height or tallness of the displayed objects. The alignment (vanishing lines), always run to the vanishing point.

Actually pretty self-explanatory. You place one vanishing point, depending on the Perspektive in use (Bird - Human - Frog). And acertain the vanishing lines from there. Good method to draw the view down an elevator shaft or into a tunnel. 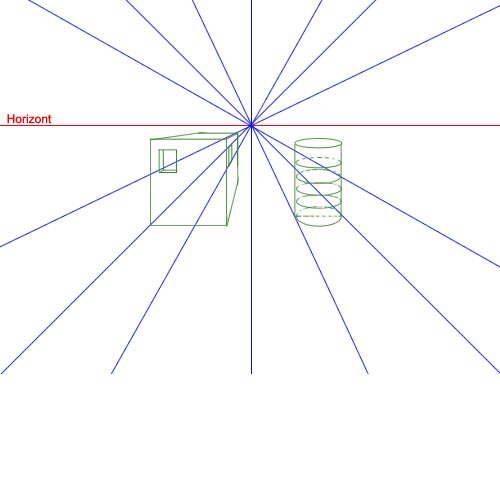 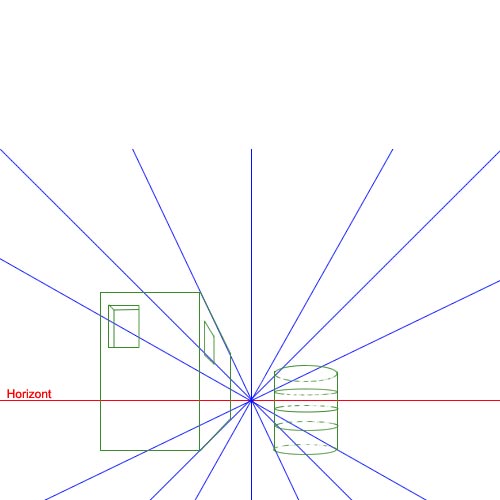 We covered the basics and the 1 point perspective.

On to 2 point perspective.
In addition I´ll answer the question: "How the hell, do I keep the distance in between two windows constant, while constantly foreshortening the window row?".

Something I forgot to mention. To create a bird or frog perspective it isn´t entirely necessary to move the horizon up or down. It can also be achieved, by moving the vanishing points up or down.
Attention: when using many vanishing points, keep them on the same level, and don´t place them to far from the horizon. Unless, of course you are trying to create an odd effect.

2 Point Perspective, as the name already suggests you have 2 vanishing points. Depending on there placement you can warp the motive. I.e. 1 VP is near the center of the horizon and the second VP very far from the center. (Maybe, even outside of the picture) The result is, that on side of the motive foreshortens extremely, while th other only gradually foreshortens. For example, a house corner (see picture below)
Now we answer the aforementioned question, about the consitent distance between windows, while constantly foreshortening the window row.
The method to achive this, can be observed in the picture.Take two vanishing lines, which have the same vanishing point, and connect them with a vertical line. From the top intercept point, draw a line diagonally to the lower vanishing line. (Decide on the angle of the diagonal line, and adher to it for the whole row)

You end up with a new intercept point, which is the origin of the vertical line which you draw up towards the top vanishing line. Repeat until you´ve reached the end of the house wall.
If you adhered to the choosen angle while drawing the diagonals, then your result is a perspectivly correct in between windows distance in a foreshortend window row.
Tedious I know. But there is just no getting around it, if you want to get the perspective right. 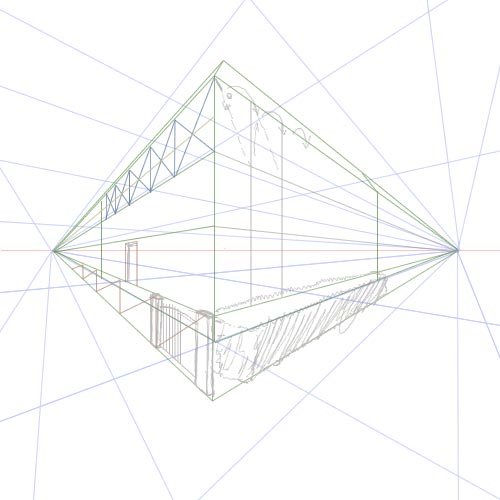 This is an augmentation of the 2 point perspective.
The third point, is introduced. This 3. vanishing point is placed under or above the horizon/level on which the opther two vanishing points are placed.

Depending on how strong you want to create the feeling of height, you place the 3. Point farther away. For instance in the example, the point is placed very far away from the line of the 2 corresponding vanishing points. Looks a bit odd, doesn´t it? A bit like looking through a door viewer.

As you can see, the rule "Consistant Distance By Forshortening" can be applied here, aswell.
The width of a cylinder stay the same in 1 point and 2 point perspective
In other words, the width doesn´t foreshorten.

In 3 point perspective, for example one draws a piller more like a cone, once again the rule "C.D.B.F" can be applied, to have exact perspective.

Hopefully I could clarify any questions concerning perspective. 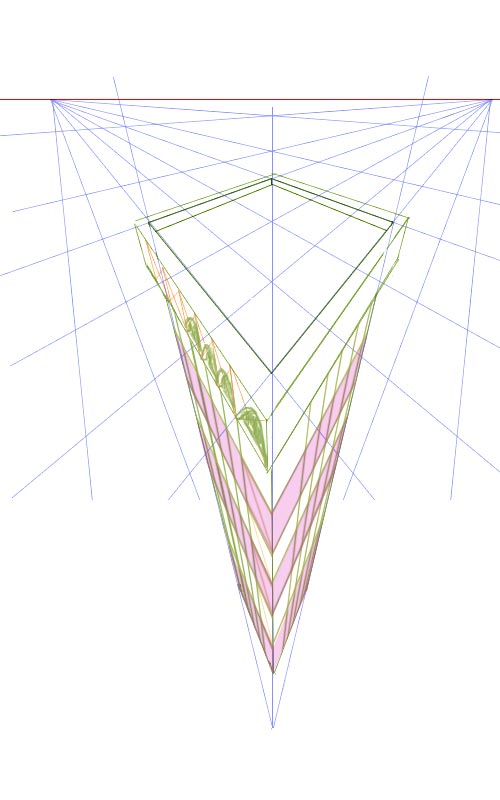 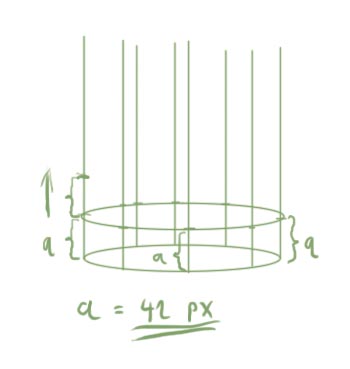 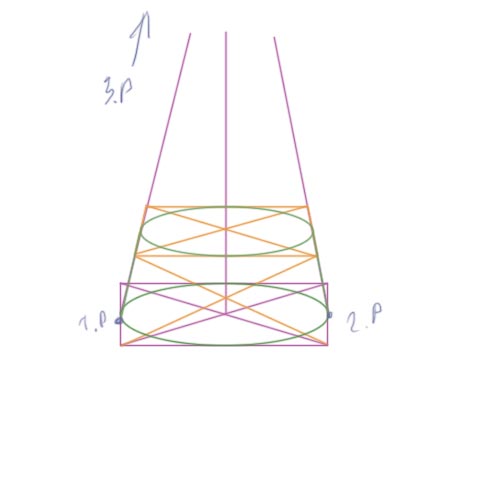 As a little extra, here a little example of a spiral stair case.
As shown in the sketch build an octagon (perspectivly correct).
(it is easier, but in theory you could also use an ellipse)

Sequence of working steps in creating the octagon:

Once again, if you´re goal is correct perspective, you´ll have to draw the octagon for each step up the stair case. That way you ensure that all distances and proportions are correct.

That takes a friggin long time!
Why the hell, does one have to do that?

The octagon becomes vertically slimer, the nearer it gets to the horizon. And vice-versa when moving away from the horizon.
It is exactly the same behaviour,as that of the ellipses in the previous examples. (see picture above 1 point perspective) 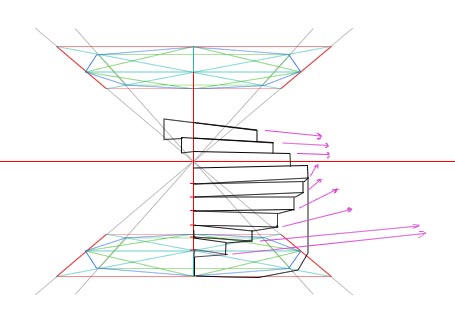